Stunning exhibit is now on display at the impressive Mash Gallery through March 26th downtown LA located in the Arts District.

The À GOGO II exhibit had its debut on Thursday Feb 17th, 2022 at the exclusive W Hotel and certainly set the standard of art exhibits to a higher level!

Two years of precise dedication and commitment have paid off to ensure the 2022 exhibit is a stunning and memorable experience for all artists, art lovers and the creative Los Angeles community. This is not to be missed.

Mash Gallery owner Haleh Mashian has worked tirelessly selecting her artists and presented them in a breathtaking manner which wowed all those in attendance. The À GOGO II exhibit is tasteful, vibrant and uniquely filled with an array of talented artists.

Mashian has diligently earned a reputation as a perfectionist and has an eye for selecting the very best in art which was evident at the extravaganza. The four hour event was filled with positive and light energy as the sounds of the DJ pulsed and Hashian even managed to fit fabulous fashion shows in every thirty minutes throughout the evening, a diverse selection of models wore Mashian’s own stunning clothing collection called Mash City which has been featured in many magazines including Forbes.

The much anticipated exhibit is a continuation of Mashian’s outstanding show À GOGO in 2020 which had also had record attendance and received critical acclaim. Although the 2021 exhibit was postponed due to the pandemic, Mashian put her typical positive spin on things and used this time to seek out and work with special unique artists. Mash Gallery had promised to produce a larger scale show and Mashian, in her typical fashion, has delivered just that.

À GOGO II consists of a collection of unique works from local, national and international artists referring to an extensive array of their technique, visual strength, language, and culture. The viewers are invited to new ways of exploring abstraction through a variety of mediums.The talented artists have come together to create a cohesive yet dissonant exhibition where each painting stands alone and yet lends itself to be part of a full orchestration. The simplicity meets the unconventional palette, values, and visual color contrast which excites the eye and evokes imagination, involvement, and certain moods. This assertively dynamic, raw, edgy and uplifting exhibition explodes into a visual ecstasy. 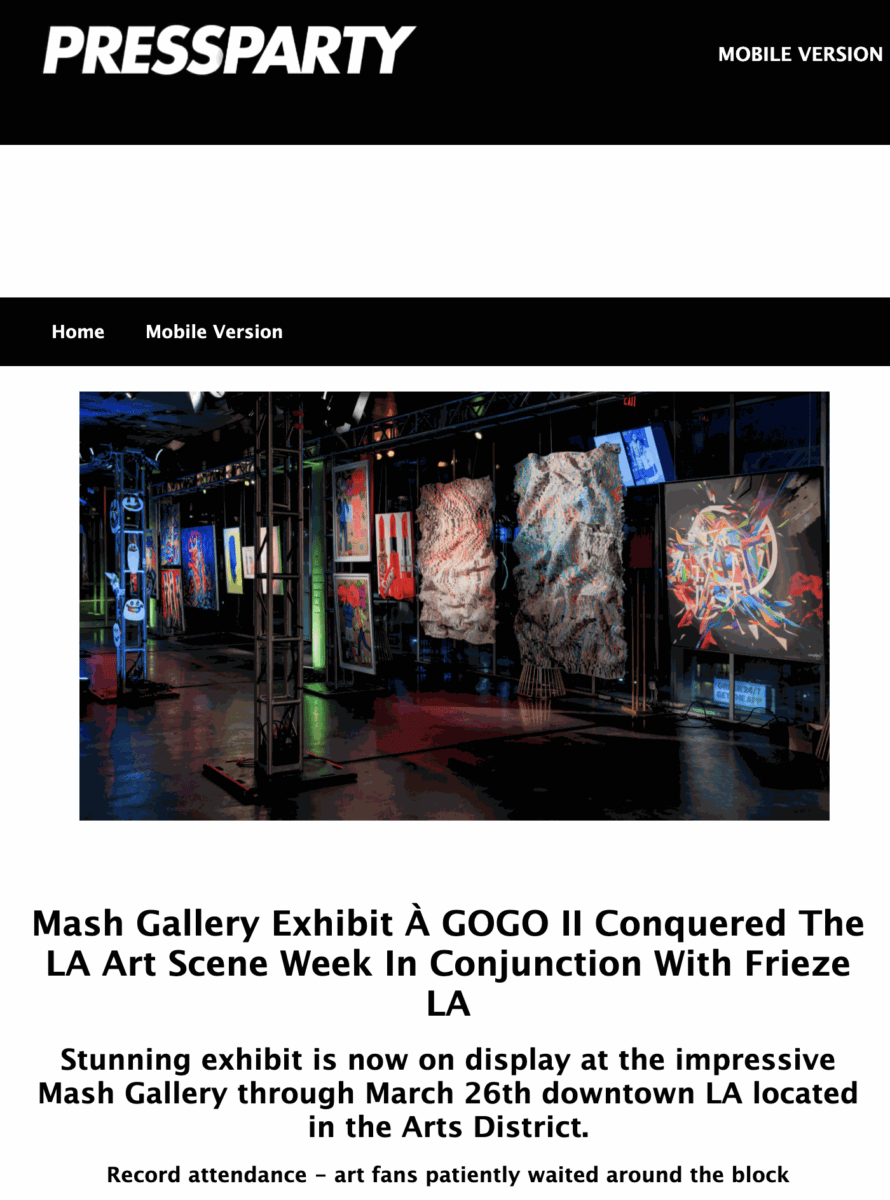 Mashian has been climbing the curatorial ladder with increasingly exciting and innovative exhibitions securing her place as a creative force in the Los Angeles art community as an accomplished artist and philanthropist. Mashian, also has a unique talent for inviting established artists as well as discovering new and emerging artists.

Mashian is extremely supportive of all talented artists and this is evident in everything she does creatively. Her passion and commitment to her gallery and supporting her fellow artists is second to none. “I am absolutely thrilled with the results of the show’s debut. A wonderful turnout of art fans, collectors and media. The response to the art, artists and the fashion shows was spectacular. We couldn’t have asked for more and we are looking forward to having the show at the Mash Gallery until March 26th” Said Mashian.

Art lovers who were not lucky enough to have a ticket to the exhibit’s debut can see the show which is now on display until March 26th at the Mash Gallery.