Curated by Mash Gallery’s Haleh Mashian, Yaraghi’s momentous photographic series tells the story of the women rice farmers of the coastal regions of Northern Iran. Yaraghi, captivated by the iridescent rice valleys off the coast of the Caspian Sea, observed that most working in the tall rice grasses and patchwork of shallow rice paddy pools were women.

Women, worked bent down in the mud pools wading in calf-high waters, with printed scarves tied around their mid-sections and distinctive yellow or pink gloves. Women carry large shallow pans of young sprouts to plant the next crop. Women dig the soft walls that separate each patty.

Yaraghi’s keen eye captures the post-harvest of women laying out the long stalks—now golden—for drying. Older women do the repetitive motion of separating the rice kernels from the dried husks. Yet another woman makes dough in a covered workspace outside.

Yaraghi’s arresting color photographs depict that most rice farming is still largely done by hand and at times, mostly done by women. Each young sprout is hand-planted in shin-high water. Long hours of walking in the mud, and working with bent backs to place each sprig securely in mud have caused some of the older generation to have permanent spine curvatures. Yaraghi documents it all—the families who farm together, the multi generations of women minding the fields, the songs that the women sing as they work—a matriarchy that is the backbone of the land.

“Most of these women working in such conditions in unbearable heat, were almost always joking around together, laughing, or at least smiling and sometimes even singing,” observes Yaraghi. The filmmaker noticed a camaraderie around these women; hard work is a shared experience as the women feel pride in their labor, the harvest from the mud of the earth, and the belief that work is a salve to both communal and personal worry.

Yaraghi employs his cinematic sensibilities to imbue his still photographs with a sense of movement and vivid presence. The images of the Safa Series brings to life the song of these women, their relationship to the land they beckon and harvest, and their communal ties to one another. Northern Iran’s vibrant landscape is the backdrop for these women’s shared experiences of labor and reward—but also of the resilience and fortitude of these women rice farmers.

Upon seeing Yaraghi’s photographs for the first time, Haleh Mashian, owner of Mash Gallery, was struck by a sense of nostalgia for the countryside of Iran. “These photographs brought back so many memories of growing up in the same region. They capture the beauty of Iran and its people without being political. The charm, the joy, the perseverance is all there.” Mashian calls this virtual exhibition, ‘Safa’ which in Farsi means the confluence of charm, innocence and hospitality. Mashian feels the photographic series depicts a life where nature’s cycles and the cycle of living are more simply and closely intertwined; everyone has a purpose and is buoyed by the surrounding community.

Yaraghi’s lens records how work can bring a satisfaction and joy that transcends the difficulty of the labor itself. Yaraghi will extend this series to future exhibitions. His first feature film “Meeting Leila” (2012) starring Leila Hatami and his second feature film “Finals” (2016) starring Shahab Hosseini, were both co-written by the late-great Abbas Kiarostami. 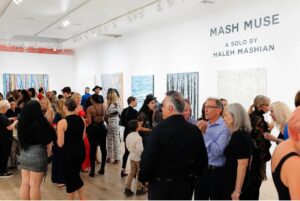