At Mash Gallery through November 2nd, Los Angeles-based artist Maggi Hodge exhibits a large body of vibrantly colored work both figurative and abstract. Women, Chaos, and X is a mix of large scale and smaller canvasses that depict nudes, beach scenes, languid assignations, and the power and empowerment of women, along with a look at the rampant voyeurism inherent in today’s social media. Graceful, evocative, and above all else, viscerally gratifying, the works occupy an exciting emotional space as well as an artistic one.

Hodge explains “My work really is about women, and all the different choices we have today. And yet some women are still really shackled, whether they realize it or not. They are overexposed, and participate in that overexposure willingly, it’s as if we’re hypnotized to do this. Posing on Instagram, in public – we expose ourselves in so many ways.”

According to Hodge, the current exhibition was at least in part inspired by spending time at the beach and seeing women go about their lives there. She spent time in Huntington Beach, spotting women she included in these works, including a tattooed girl in a bikini.

Working primarily in acrylic with elements of oil stick and charcoal in the first layer of her work, she says the vibrant palette that she chose was in part because “It’s alive. I love the aliveness of it. Once in a while, I paint in monochromatic shades, but I love color, I love laying down the color pattern, and the mixing of the color.” While she also finds working in acrylic deeply satisfying, the oil stick also holds great appeal. “It’s so immediate,” she says, “you can work even more quickly.”

Her pleasure and sense of immediacy shows in these works, which have a sensual quality as well an inherent sent of power, as if her subjects – whether women, couples, or abstracted images – were claiming theirs.  “I did a few images in black, white and gold in this series, mostly because not everyone wants the bright colors. But honestly, I prefer color,” she enthuses.

The tropical beach feeling of many of these works also seems to require the use of a bright, sunshine-drenched, color-saturated palette.

Over the years, Hodge has painted many women as her subjects since she first began working as an artist. This exhibition, she says, incorporated what she describes as a freer style, both in terms of subject and brush stroke. “My brush work felt looser…and I tend to address things more metaphorically now. These works were more fun and less structured than in recent works,” she says, adding “I always use a lot of color, even though sometimes people try to persuade me not to,” Hodge laughs.

Describing this series as both powerful and nurturing, the artist relates that she feels these two elements are intertwined. “Nurturing gives abundance and love – which are also elements of power — without having to battle everything.”

Her propensity for painting nude female figures is due partly to the history of classical fine artists painting nude subjects. “The nude figures is a powerful statement, and I always had a passion for them, from the classic to Picasso.”

The work in this series incorporates the letter ‘X’ within many works, and in several of the titles. She says there is no specific reason why she incorporated the letter. “I was doing several paintings at once, and the ‘x’ kept showing up. I felt it needed the statement as a subject without actually being a subject. And I like the graphicness and mystery of it.”

And of course, the letter symbolically manifests a crossroads; and also literally represents the female chromosome.

Representing both the quintessentially female and the duality that is often a part of women’s lives, Hodge uses the letter as pattern, place marker, identifier; as background, decorative enhancement, as a subject, and as a stand-in for an exclamation point.

In the piece “X-rated,” the letter somewhat playfully represents the lively pink and rosy nakedness of her couple, reclining, the man’s body hidden in a lattice of x’s. In “Heart-tat 1,” another couple embraces, behind another cross-hatched camouflage of x-patterns. The woman’s arm is also tattooed with x’s.

In “Wrapped,” another couple is sheltered from prying eyes by a dazzle of yellow marked with the letter.

“Web X” is a woman with a theatrical style, which Hodge posits is a contrast to the “beachy type” of many of her other female figures in this series. The figure could be appearing on stage, or perhaps live on the internet; her attire includes an x pattern.

In “X,” which Hodge describes as “the final work in this series,” the letter is the penultimate exclamation point. “This was x-out, the end, the last of the show, we are done,” she says. The work, which resembles both quilt and game board, arrays x’s around a small square of o’s as in a deeply lovely version of tic-tac-toe.

In “Xcellerate,” we are mainlining creative signals, haste, tire skid marks, racetracks, and fast cars; while in “Xposed,” the graceful female figure, her image snapped by dozens of cameras, is clad in a dress which binds her in x’s – the blessing/attention/objectification/curse of being female.’

In the abstract work “depth of x,” with its thick application of gold paint and mica chips as it’s off-center heart, the viewer feels as if the “X’s” opposite the glittering space may mark a secret entrance, a buried treasure, something hidden beneath that marker. Hodge describes this work as being about “openings and closings, about everything that’s expected of women, and what it means to be female.” In a sense, here, a woman is a hidden treasure.

With the work “XY,” we get the rare deviation in this series from the female figure as main subject to a male portrait – the letters/title represent the idea of being male.

Other images, such as the lustrous purples and pinks of the abstract “Rapt,” eschew the letter. This work Hodge describes as a “delightful happening energy, a walk, a garden” – or perhaps hatchlings, abstract stand-ins for mother and child.

The undaunted gaze of the figurative “Blue Lady,” was inspired by the idea of ancient Persian or Indian paintings, Hodge says – here, the x’s are background patterns, a fence or porch wall behind the reclining yet powerful figure.

With “Mask,” once again the x’s are background – on a pillow, a wall. The figure here seems removed, hidden, even as her face is exposed and the black cat face at her feet represents the mask that she once wore to cover visage, if not body.

In “13 Roses,” we see true duality, the symbolic, at-a-crossroads-x found in the links of dangling chains next to the apprehensive face of a white-attired bride to be.

In comparison, “red head” gives us a free-spirited beach girl with the sea as her background and wind in her hair.

Throughout this extensive exhibition, the letter appears to represent, above all else, the feminine, the powerful, the choices, the dualities, the crossroads which women collectively stand poised upon today. Intuitively, we have all felt at a crossroads, at one time or another in our lives – whether walking down an aisle whose trajectory may be expected but unknown, enjoying a casual encounter, reveling in attention, or embracing the tattoos we choose and those that are, willingly or not, emblazoned on our hearts. 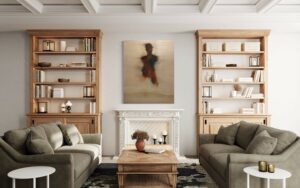